Skip to content
Previous Next
A Fairy Tale for Grownups! 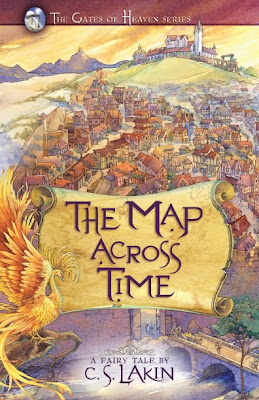 Fairy tales teach surface lessons like don’t talk to strangers that look like wolves,
remember Pinocchio when tempted to lie and true love can really happen. But, like fairy-tale greats C.S.
Lewis and J.R.R. Tolkien, up-and-coming novelist C.S. Lakin takes things beyond the surface by weaving
a fantastical tale with spiritual meaning.
Lakin continues her “Gates of Heaven” series with a new tale set in the kingdom of Sherbourne. The Map
across Time (Living Ink Books, March 2011, 978-0-89957889-7, $14.99) follows the prince and princess of
Sherbourne on their quest to free Sherbourne from a curse destined to destroy the kingdom.
“Fairy tales have long taught us concepts like right and wrong, good and evil,” says Lakin, author of 11
novels, including Someone to Blame (Zondervan, October 2010), which won Zondervan’s First Novel
contest. “But I want to explore a bit deeper, search out the darker corners of our hearts. Let God reveal
himself through the use of fiction.”
Similar to Lewis’s work, “The Gates of Heaven” series is an allegory of God’s unconditional and
everlasting love. The Map across Time reveals how those who seem insignificant and unworthy have value
and purpose. Lakin provides a back-of-the-book study guide for readers to dig deeper into the book’s
themes, as well as scriptural references to many of the sayings quoted by characters.
Each book in “The Gates of Heaven” series tells a unique story with different characters that overlap from
book to book. Every installment features a different locale, where a sacred site – a gate of heaven – had
been established eons earlier to prevent evil from gaining a stronghold in the world of men, but has now
succumbed to desecration and destruction.
The Map across Time is also receiving early praise from industry insiders like Publishers Weekly.
“The novel is fast-paced and tightly plotted, which means that the reader will quickly be drawn into the
complex twists and turns of the story and, in fairy-tale tradition, led toward a surprising yet satisfying
conclusion,” says Marcia Nelson, of Publishers Weekly.
C.S. Lakin is working on the remaining books in “The Gates of Heaven” series. Her contemporary
mystery, Someone to Blame, released to much acclaim in October, and her thriller, Innocent Little Crimes,
was a semifinalist for the Amazon Breakthrough Novel Award. Upcoming installments of “The Gates of
Heaven” series are set to release every six months. She is a copyeditor, writing mentor and a member of
numerous writers and editing groups, including Christian Authors Network, Christian Proofreaders and
Editors Network, and American Christian Fiction Writers. Lakin lives in Boulder Creek, Calif., with her
husband of 27 years. For more information about C.S. Lakin and her writing, please visit
www.cslakin.com.