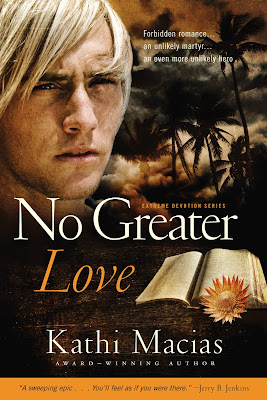 No Greater Love is set in South Africa in 1989, just prior to the release of Nelson Mandela from prison and the overthrow of the Apartheid system that had kept the majority of South Africa’s population living as second-class citizens for decades. A forbidden interracial romance, at a time and place where such relationships were dangerous and even deadly, kicks the book into overdrive from the very beginning.

In honor of Black History Month I’m offering a free copy of No Greater Love, the first book in the Extreme Devotion series, to certain commentors WHO ARE ALSO BLOG FOLLOWERS, though I’m not saying which ones. (I have pre-chosen the numbers and written them down; I’ll continue the giveaway throughout the month, so leave a comment as often as you like WITH CLEAR CONTACT INFO, and be sure to become a follower if you aren’t already.)

You can learn more about the book by watching the video trailer at http://www.youtube.com/watch?v=XOx8FRSEheA or visiting my website at www.kathimacias.com.